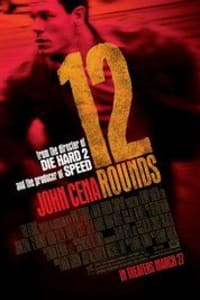 12 Rounds is an Action, Crime, Thriller film directed by Renny Harlin and written by Daniel Kunka. It was released on 27 March 2009 (USA). It stars John Cena, Ashley Scott, Aidan Gillen. The film’s content : Detective Danny Fisher discovers his girlfriend has been kidnapped by a ex-con tied to Fisher’s past, and he’ll have to successfully complete 12 challenges in order to secure her safe release…