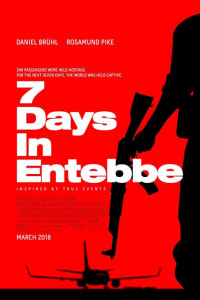 In 1976, two Palestinian and two German terrorists hijacked Air France Flight 139 en route from Tel Aviv to Paris. There, the Jewish passengers are held hostage, with their safety contingent on the release of dozens of terrorists jailed in Israel, Germany and Sweden. After considerable debate, the Israeli government employs the Israeli Defense Forces to execute a daring rescue.