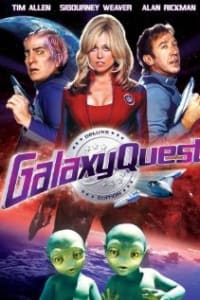 The sci-fi television series “Galaxy Quest”, which took place aboard the intergalactic spaceship NSEA Protector, starred Jason Nesmith as suave Commander Peter Quincy Taggert, Gwen DeMarco as sexy communications person Lt. Tawny Madison (a role which consisted solely of repeating what the computer stated, much to Gwen’s annoyance), Shakespearean trained Sir Alexander Dane as alien Dr. Lazarus, Fred Kwan as engineer Tech Sgt. Chen, and Tommy Webber as child gunner Laredo. Eighteen years after the series last aired, it lives on in the hearts of its rabid fans. However, it lives on in infamy for its stars, who have not been able to find meaningful acting work since. Their current lives revolve around cashing in on however those roles will afford, which usually entails attending fan conventions or worse, such as shopping mall openings. Only Jason seems to relish his lot in life, until he finds out that his co-stars detest him because of his superior attitude as “the Commander”, and much …

Harry Potter And The Half-Blood Prince