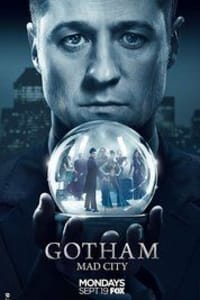 Gotham is an American crime-drama television series served as a straightforward story of Gordon’s early days on the Gotham City police force. Season 3 begins with Gordon working in a monster-ridden Gotham as a bounty hunter and seeking to find answers about the Indian Hill escapees and why their powers appear to be killing them. Bruce’s doppelganger roams the streets and Barbara and Tabitha open a nightclub called The Sirens.