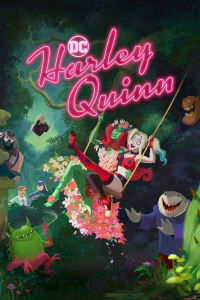 Wrapping up their “Eat. Bang! Kill. Tour,” Harley Quinn and Poison Ivy return to Gotham as the new power couple of DC villainy. Along with their ragtag crew – King Shark, Clayface, Frank the Plant - “Harlivy” strives to become the best version of themselves while also working towards Ivy’s long desired plan of transforming Gotham into an Eden paradise.