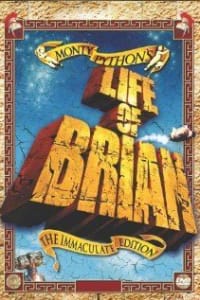 Directed by Terry Jones, this comedy follows Brian Cohen, born in Bethlehem in a stable next door, who, by a series of absurd circumstances is caught up in the new religion and reluctantly mistaken for the promised messiah. Ultimately he is brought before Pontius Pilate and sentenced to crucifixion. Rather than utter the Last Six Words, Brian leads his fellow crucifixees in a spirited rendition of a British music hall cheer-up song “Always Look On The Bright Side of Life”.

Monty Python and The Holy Grail

And Now for Something Completely Different

Monty Pythons The Meaning Of Life