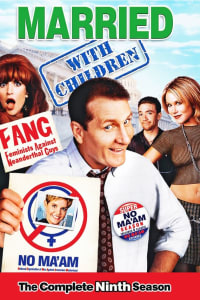 Married with Children is an American sitcom featured a dysfunctional family living in a fictional Chicago suburb. In the beginning of season 6, Marcy and Jefferson announcess that they are expecting a baby, sends Al into pearls of laughter saying that it’s the end of Jefferson’s life, until Peggy announces the same.