New Terminal Hotel (Do Not Disturb) 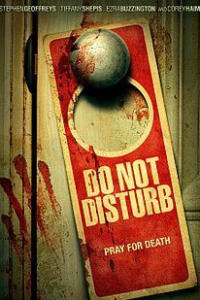 Don Malek (Stephen Geoffreys) isn’t the usual tenant found in the skid row hotels of downtown L.A. Grief-stricken since the murder of his fiancee Katherin, the successful screenwriter-turned murderous vigilante is bent on revenge against studio head Stanley Glissberg, the man cleared of murder charges in Katherin’s death. Don can’t forget - and Glissberg’s going to pay. Enter Don’s tenacious literary agent, Ava Collins (Tiffany Shepis), who tracks him down and wants to sell his manuscript - if there is one - or cut him loose. He assures her he’s holed-up in the cheap room to write, and his story’s a work-in-progress. Adding to his slippery slope, Don calls in a favor from a neighbor, and in doing so, uncovers despicable abuses down the hall. Spitz (Ezra Buzzington) is a hard-drinking former Marine and paraplegic, with a penchant for hookers and a violent streak. When he demands a return of the favor, Don must choose between turning a blind eye, or quickening his own destructive spiral…