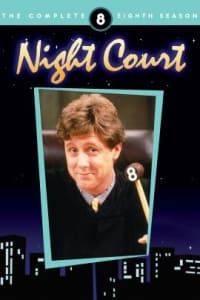 Night Court is an American television situation comedy with e setting was the night shift of a Manhattan municipal court, presided over by a young, unorthodox judge. In the opening of season 8, Christine returns after the birth of her baby and deals with the legacy of her replacement and Dan wants Bull to date his visiting sister; and Harry loves at first sight when he lays eyes on Margaret Turner, a bossy news reporter assigned to the courthouse.