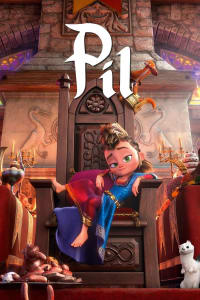 Pil, a little vagabond girl, lives on the streets of the medieval city of Roc-en-Brume, along with her three tame weasels. She survives of food stolen from the castle of the sinister Regent Tristain. One day, to escape his guards, Pil disguises herself as a princess. Thus she embarks upon a mad, delirious adventure, together with Crobar, a big clumsy guard who thinks she’s a noble, and Rigolin, a young crackpot jester. Pil is going to have to save Roland, rightful heir to the throne under the curse of a spell. This adventure will turn the entire kingdom upside down, and teach Pil that nobility can be found in all of us.

Around the World in 80 Days

My Knight and Me - Season 1