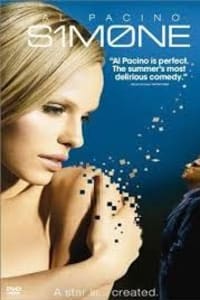 S1m0ne (Also Known As: Simone) is a Comedy, Drama, Sci-Fi film directed and written by Andrew Niccol. It was released on 23 August 2002 (USA). It stars Al Pacino, Catherine Keener, Rachel Roberts. The film’s content : A producer’s film is endangered when his star walks off, so he decides to digitally create an actress to substitute for the star that everyone thinks is a real person…