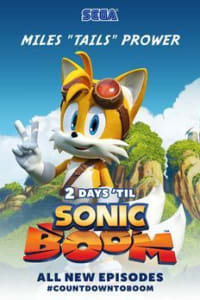 Sonic Boom is a French-American CGI animated series based on the Sonic the Hedgehog video game franchise. Season 2 opens with Sonic letting martial arts action movie star Tommy Thunder follow him around and observe his “hero process”. However things get bad when Tommy’s over-the-top ego clashes with Sonic’s and starts claiming credit for the team’s battles.