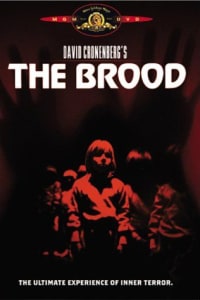 The Brood is a 1979 Canadian science fiction psychological horror film directed by David Cronenberg. The film is about a man, Psychotherapist Hal Raglan, who runs the Somafree Institute where he performs a technique called “psychoplasmics”. He tries to uncover an unconventional psychologist’s therapy techniques on his institutionalized wife, amidst a series of brutal murders

Shivers (They Came from Within)