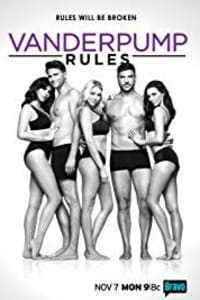 Vanderpump Rules is an American reality television series airing on Bravo that debuted on January 7, 2013, with the first season originally eight episodes. A spin-off of The Real Housewives of Beverly Hills, the series features The Real Housewives of Beverly Hills cast member Lisa Vanderpump in the title role and her staff at Vanderpump’s West Hollywood, California, restaurant SUR.