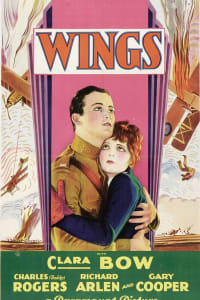 Wings, the first feature film to win an Academy Award, tends to disappoint a little when seen today. Too much time is afforded the wheezy old plotline about two World War I aviators (Buddy Rogers, Richard Arlen) in love with the same woman (Jobyna Ralston), while the comedy relief of El Brendel is decidedly not to everyone’s taste.

Call of the Wild

The History of Love